Exclusive furnishing and lighting collection by BRICALE™ for Viadurini, the prestigious e-commerce dedicated to the sale of the best Italian and European furniture brands. BRICALE™ and Viadurini blend into a interesting project of great development and professional growth. Always attentive to innovation, their main aim is to realize their customers' dreams.

During the Venice Design Week 2015, BRICALE™ has presented the CONTINUO Collection in the charming Venice, where Briccola wood comes from. The exhibition of the table lamp and the side table was located in one of the historical palaces in the heart of the city, Hotel Saturnia & International, just few metres from the famous St. Mark’s Square. 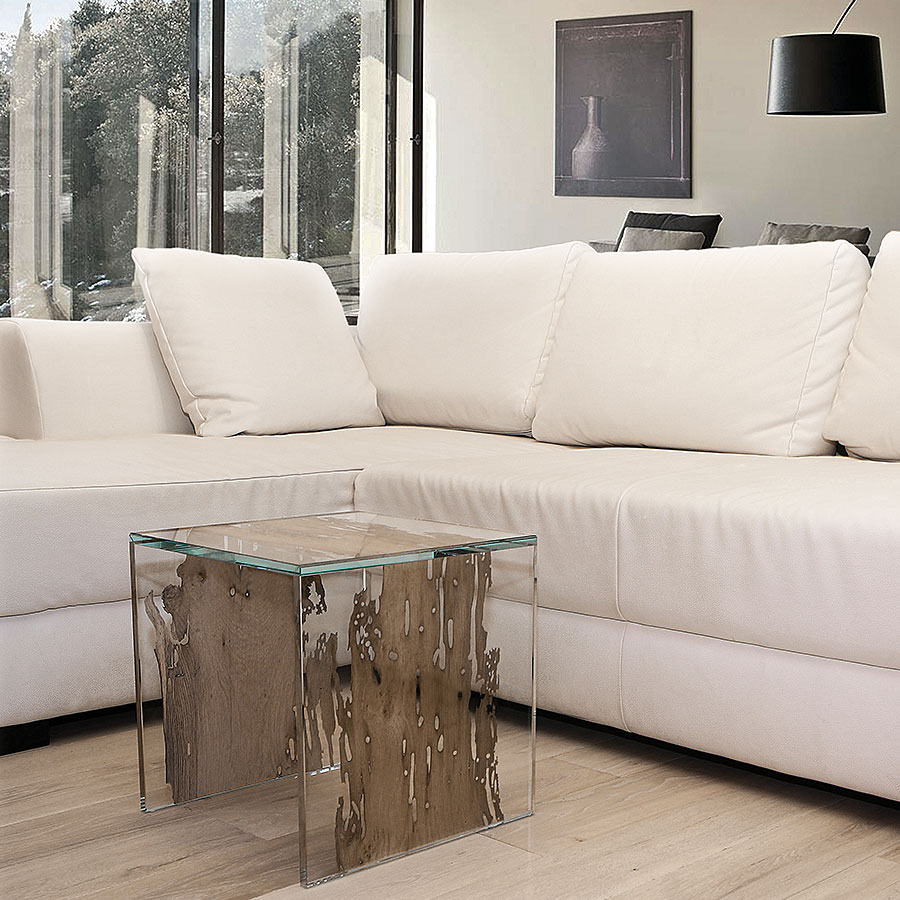 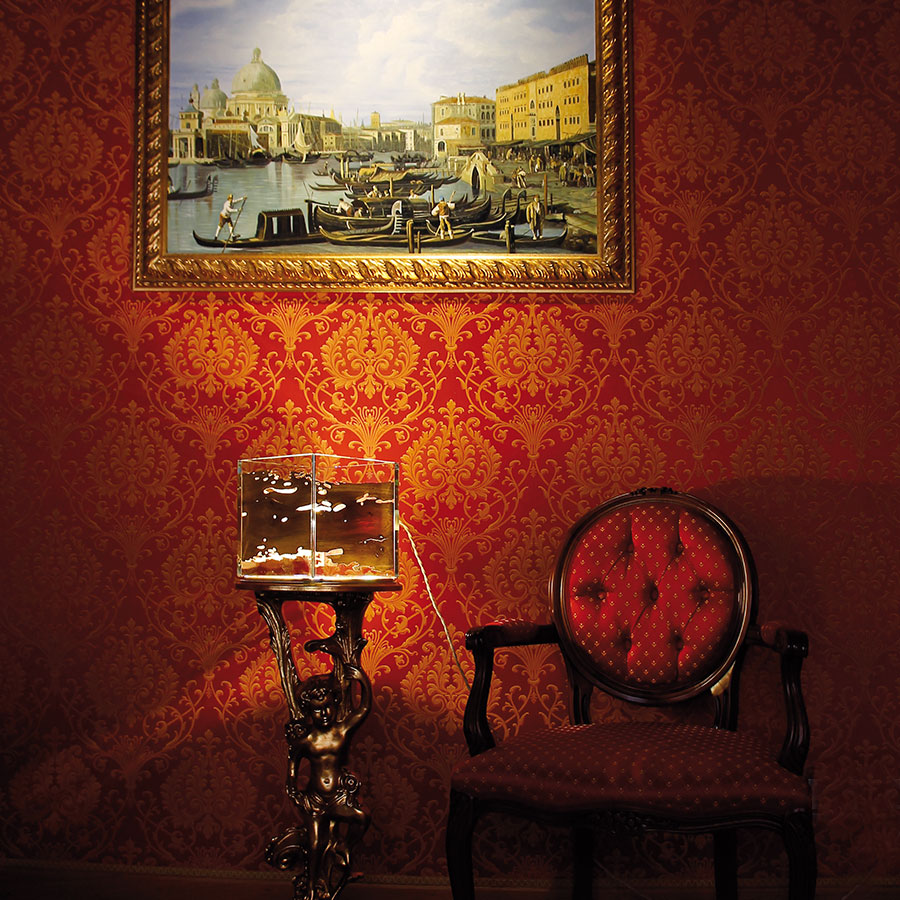 Aesthetic lightness and structural sturdiness, artisanal tradition and experimentation in the use of the materials.
BRICALE™ introduce an extraordinary news in the interior design world: the original fusion between glass and Venetian Briccola wood.
The wooden sheet is fixed to the glass, without being embedded, so you can touch its spectacular nature.

The external structure of CONTINUO furnishings is transparent, essential and functional. It aims at protecting the irregularity of Venetian Briccola wood. You surprisingly can touch the wooden sheet in the inner side of the piece of furniture.
A precious scroll that tells us the history of Venice, which is not only to admire and to possess, but also to live.

ARTISANAL MANUFACTURING 100 % MADE IN ITALY

The careful and experienced Italian artisanal manufacturing allows to realize the high-quality CONTINUO collection. Each piece of furniture is made with extraclear glass sheets decorated with a single Briccola wood layer. The wood is subject to a slow and careful cleaning and drying process, before being cut and sanded. A thin layer of ecological transparent varnish helps preserving its natural beauty. Each single piece of Briccola wood is carefully selected under the supervision of the designer. Thanks to an innovative and tried-and-tested gluing techniques, the wooden sheet perfectly adheres to the glass, without being embedded, so you can touch this special wood. The glass is cleaned and finished by hand. Eventually, every part is carefully welded together in an unique structure. The outcome is a very prestigious design collection.

The elegant and sophisticated design which characterizes the CONTINUO collection can enrich any kind of interior, from the most classical to the most modern, with its inimitable timeless style. 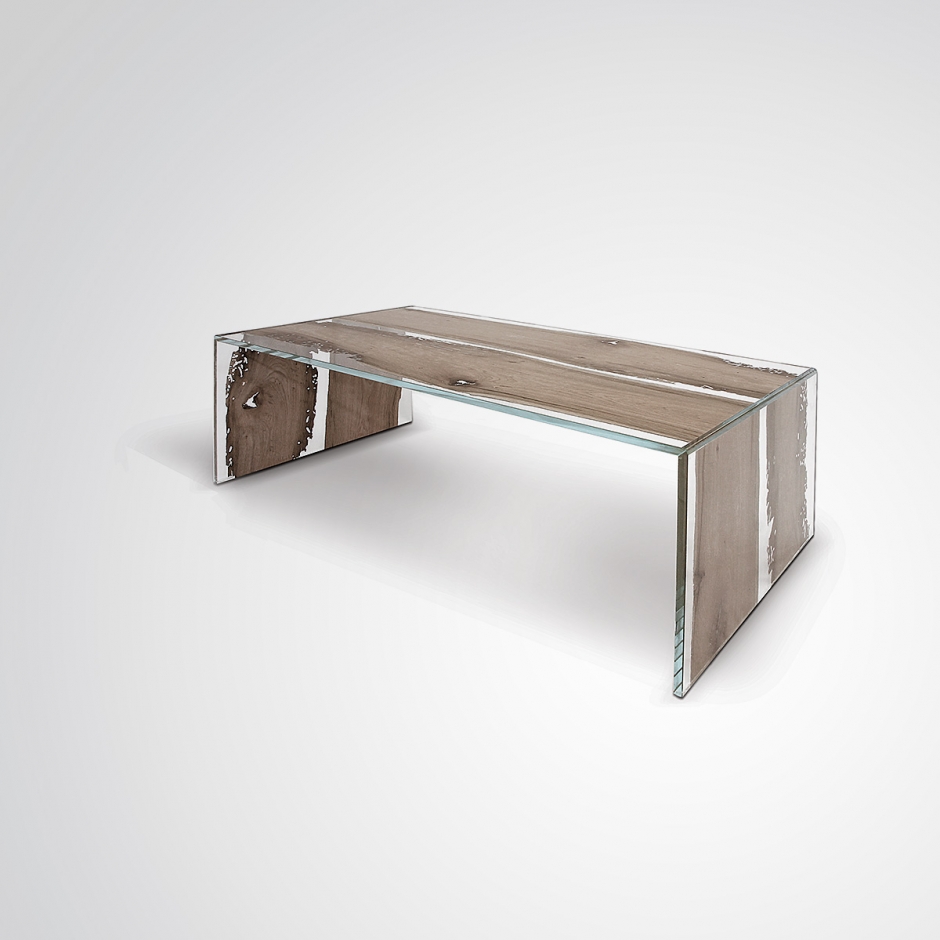 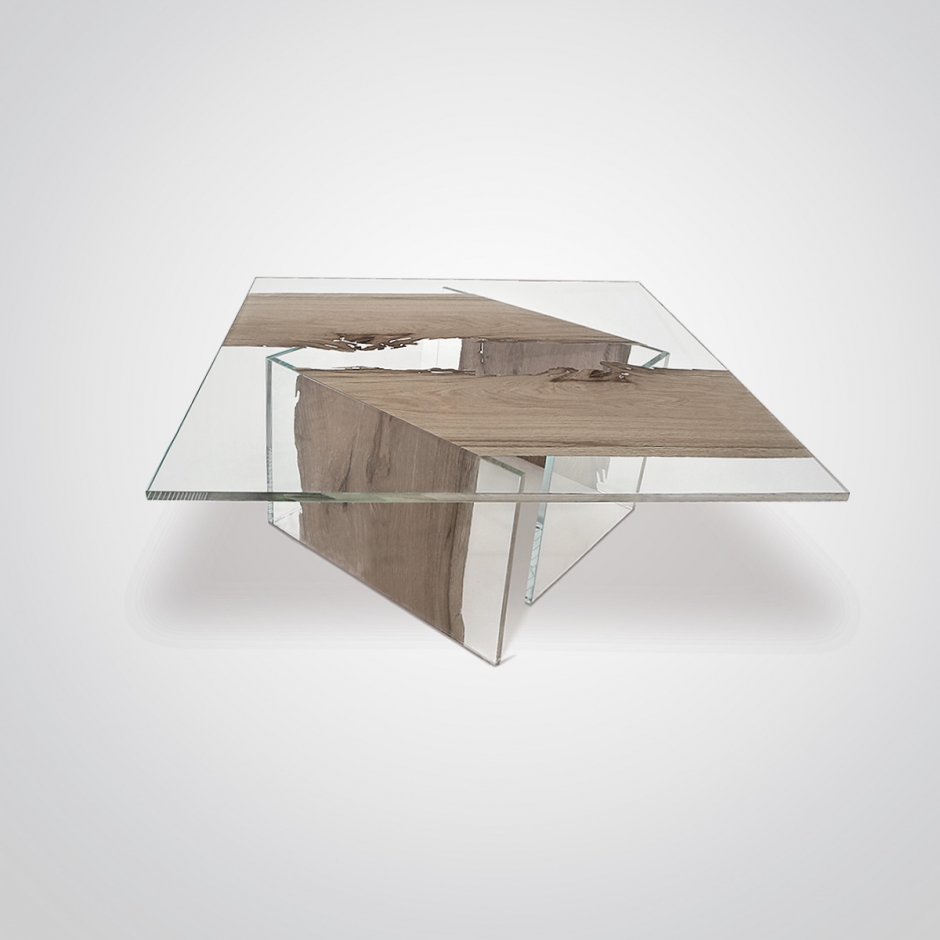 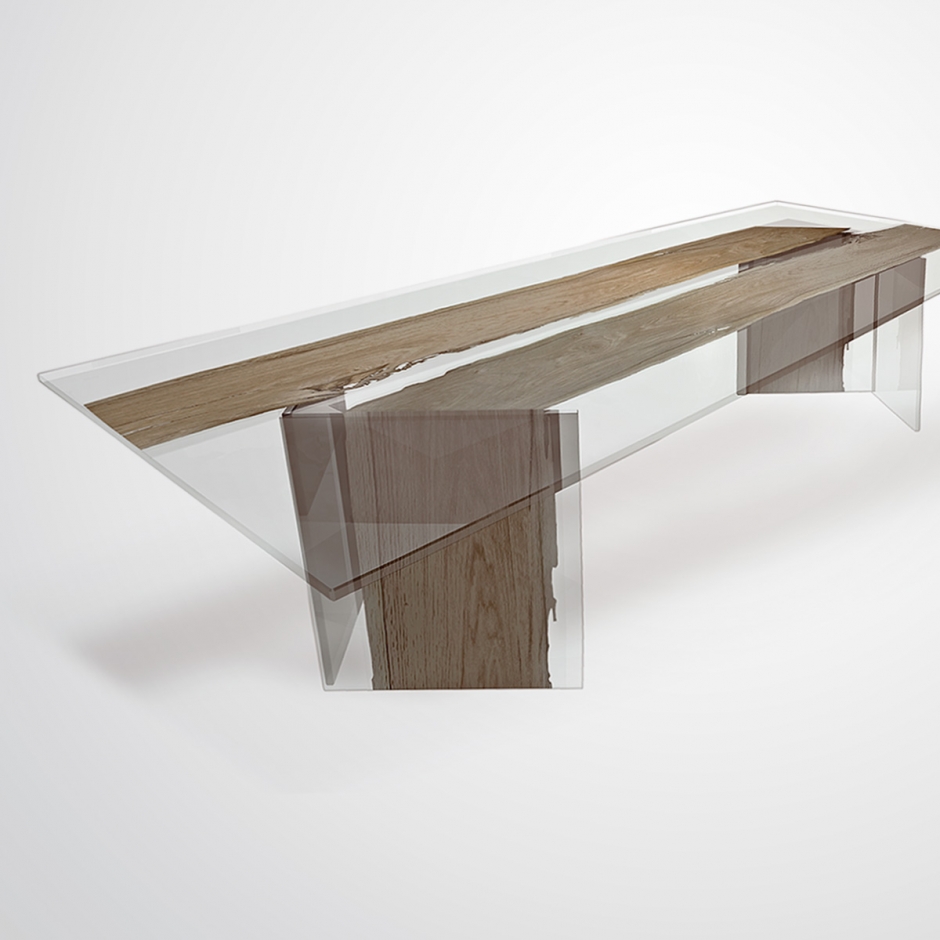 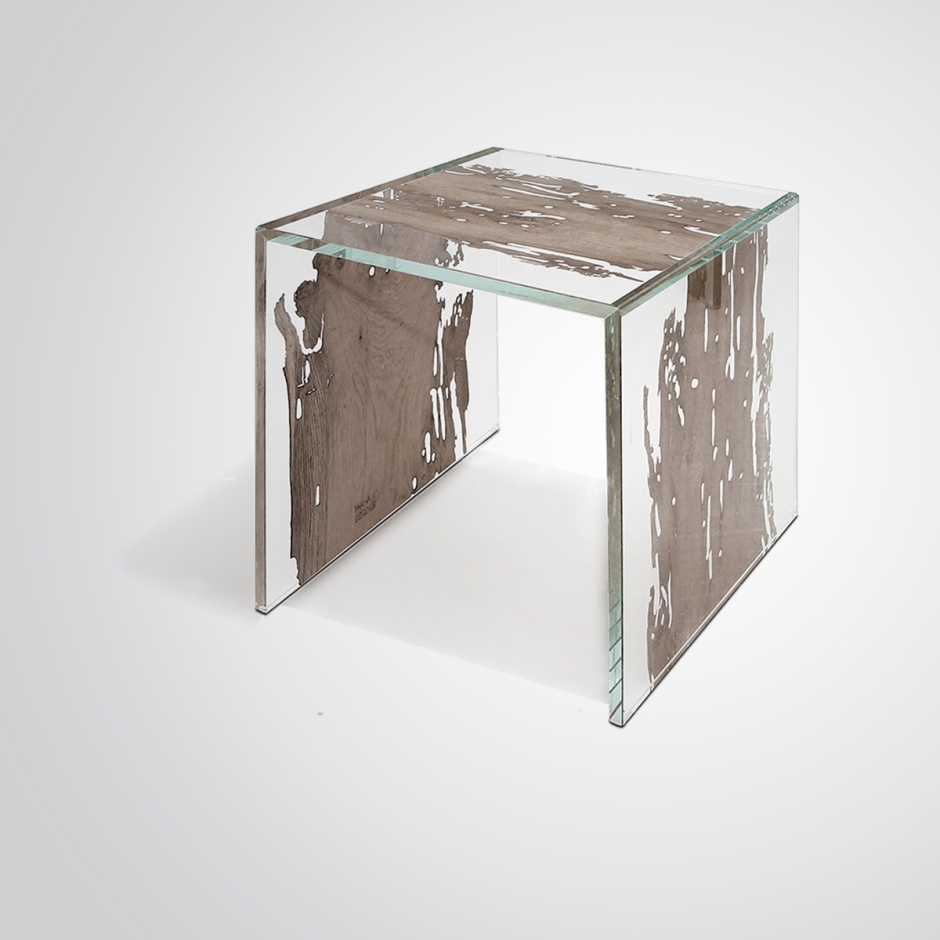 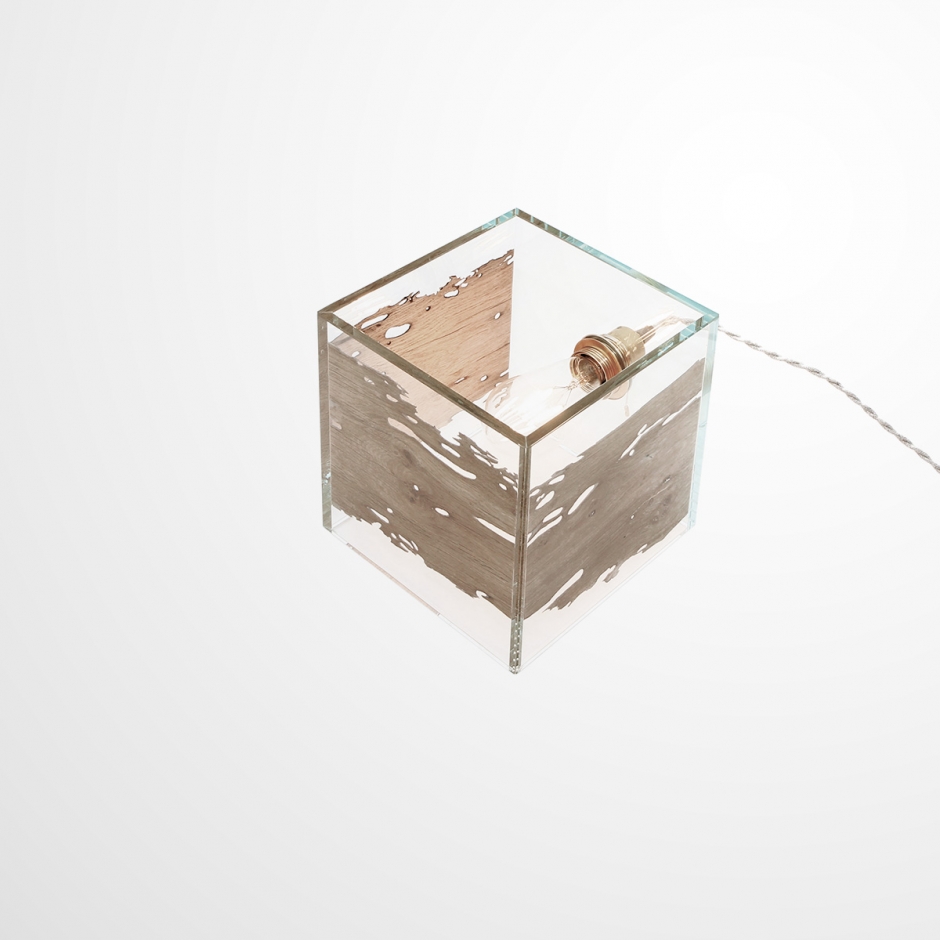 "Glass as cold and transparent water. And just below the surface, lightweight and perforated wood.
Nibbled by the shipworm, it takes his revenge becoming embroidery.
Touch this precious wood is like touching history with hands. A history about a magical city, one of the most beautiful cities in the world.
Powerful and magnificent, it is poised between land and sea... Queen of Adriatic Sea, Venice.
And in front of it, sixtythousands, maybe ninetythousands of lagoon wooden poles
called briccole in Venetian language, indicate the way to sailors, as guards and sentinels.
Their life is strange. Lapped by the water, they are static with their feet sunk in mud, watching the changing world over the centuries.
They have seen sailing ships and powerful Doges, bloody battles, festivals and carnivals.
They stay erected and dignified until a small mollusk has given its last bite...
But their end in the lagoon waters is a new beginning. And now, become tables, lamps, furniture. The wooden poles are safe.
Their thin surface is engraved like a score, that sings to who can listen the song of the time,
the sea, the hopes and the dreams of one of the most charming cities in the world."